Discover the okonomiyaki, a Japanese salted pancake very popular in Japan, especially in Osaka, and which can be eaten in a restaurant or in a yatai, Japanese stand! 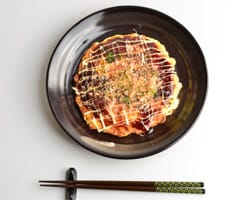 An okonomiyaki “お好み焼き” is a salty “pancake” the Japanese way. There are many kinds and it is found all over Japan. Osaka (located about 2h30 from Tokyo in Shinkansen) is the cradle of this dish. Legions are the restaurants which propose some with takoyaki.

It is often compared to a pizza because many ingredients and toppings differ depending on the recipe. Indeed, “okonomi” means “your choice”. These pancakes are prepared on demand with a variety of toppings. It is a tasty and consistent dish that can be eaten as a main course. Don’t hesitate to try to make some at home with our homemade okonomiyaki recipe.

Okonomiyaki dough is usually made of a mixture of flour, eggs, dashi or konbudashi “昆布だし” and Chinese cabbage. Various ingredients are then incorporated into it according to recipes.
Here is a list of the most common ingredients:

Everything is cooked on a large hot plate most of the time in front of you. Once it is almost cooked, various sauces are added, including okonomiyaki sauce, Japanese Kewpie mayonnaise, aonori “青のり” (it is an algae similar to nori but with a slightly different taste and a much more marked green color), and dried bonito flakes which tops it all off and gives character to the dish.

If you want to make okonomiyaki with scallops, you can fry them a little before putting them in the stuffing. You should not cook them too long either. The cooking will finish in the dough. The result is simply divine!

You have at your disposal Japanese chopsticks and sometimes small metal spatulas to cut it if you wish to share it. It is not a pizza, nor a salted pancake Breton style. It is a Japanese specialty that you can find nowhere else!

Eating in an okonomiyaki restaurant is really a good experience: the waiter makes the okonomiyaki in front of you on a teppan hot plate integrated to your table. He realizes it in 5 minutes! Moreover the price is really not excessive following the yen rate.

Personally we love okonomiyaki, it’s really delicious and quick to make! Difficult to do without it for more than two weeks. And then there is a great diversity of garnish so no weariness. It’s really a favorite dish.

Here is a video demonstration:

At the end of the preparation, when the dried bonito flakes are placed on the okonomiyaki, it really gives the impression that the dish is alive! It’s very surprising the first time. Under the effect of heat, the thin bonito flakes really look like they’re dancing.

Okonomiyaki a popular dish in Japan

Okonomiyaki is really popular in Japan. You can easily find it in Japanese festival stands or in markets. You will find okonomliyaki restaurants all over Japan but depending on the region there will be variations in the recipes:

The variant of okonomiyaki in Hiroshima : Hiroshimayaki 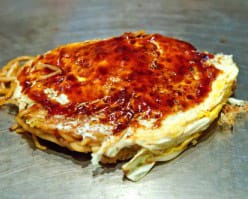 Unlike Osaka okonomiyaki where all the ingredients are mixed, Hiroshima okonomiyaki comes in several individual layers and noodles are added.

First you have the base of a thin pancake, then a lot of cabbage cut into thin strips, meat of your choice, then noodles (udon or soba) etc… it never ends! The hiroshiyami is much more consistent than the Osaka one.

The best is still to see a professional making huge hiroshimayaki in video:

Impressive! no? Fortunately, once cooked, the dish is much less bulky.
Don’t expect to eat anything else after that!

The variant of okonomiyaki in Tokyo: Monjayaki

Monjayaki, is similar to okonomiyaki but its paste is much more liquid. The ingredients are finely chopped and mixed and then cooked on a large hot plate in front of you.

Many of monjayaki’s restaurants are located on Tokyo’s Tsukishima main street.

There are many other variants of okonomiyaki, each one more succulent than the other! Those of Osaka, Hiroshima and Tokyo are the best known.

A building of okonomiyaki restaurants in Hiroshima

This dish is so popular in Japan that there are mini theme parks in buildings. The Okonomimura for example is a large complex of restaurants offering all kinds of okonomiyaki. Some of them are simply incredible! If you’re in the area, don’t hesitate to visit it!