Japanese chopsticks are used to eat, but also to cook or serve. There are some good manners to respect when a Japanese eats at the table!

Japanese chopsticks: the cutlery of the Japanese people 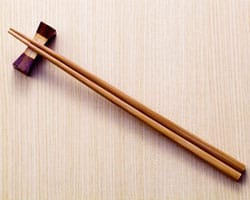 Some models, intended to be kept, are lacquered and decorated, others are made of pine, bamboo, or metal but the majority are disposable.

They also come in different sizes if you are a man, a woman or a child. This is the essential cutlery, learn how to use it before going to Japan because there will be no forks!

Don’t worry: Japanese people also like to eat sushi with their fingers, so you won’t look dirty if you do.

Disposable chopsticks and the environment

When we are in Japan, most of the time we use disposable wooden chopsticks called “waribashi” “割りばし”. Japanese people eat all day outdoors, at the office, in a park, on the train, which is why there is so much disposable cutlery. Bento or take-away meals are the main dishes of the Japanese. The huge amount of chopsticks thrown away is therefore not so surprising. Out of respect for the environment some Japanese people have long since adopted the reusable metal chopstick, see the spoon. But many people still prefer disposable chopsticks, which in their opinion are more practical and hygienic.

Japanese chopsticks for cooking and serving

There are 2 types of chopsticks :

The Japanese chopsticks “ryoribashi” “料理ばし” are 30 to 40 cm longer. They are reserved for cooking and are often used for frying such as tempura for example.
Japanese chopsticks “saibashi” “菜箸” are used to serve hot dishes. They are usually made of bamboo and tied together with string so that they can be hung.

These chopsticks are really longer but they are very handy and practical for cooking!

The children also have the right to their chopsticks, generally made of plastic or wood and especially very “kawaii”” 可愛い”! The 2 upper parts are combined to facilitate their learning: the children use the chopsticks as pliers. And there are others with rings on the chopsticks to place their little fingers.

Having Asian parents, I never used this kind of chopsticks when I was little but I must admit that these chopsticks are very playful. We bought some for our children.

Good manners to eat with chopsticks in Japan :

In Japan, there are dos and don’ts when you eat at the table with Japanese chopsticks:

1 Don’t stick your chopsticks in the japanese rice bowl because it evokes incense sticks at funerals.

2 When you eat, be careful not to point your chopsticks at anyone. Not only would this be frowned upon, it would be perceived as an aggression.

3 Chopsticks are not forks! So be careful never to stick your chopsticks into food. You must respect the products and not make a hole in them.

4 If you share a dish with other guests, help yourself with the other end of your chopsticks. Never take common food with the end that has touched your mouth.

5 The end of the chopsticks should never touch the table. Always rest them on a chopstick holder called hashi oki. If you don’t have one, you can roll up your napkin and place your chopsticks on it.

6 Finished eating? Don’t leave your chopsticks on the right side of your dish, or even across a plate or bowl. Arrange them in front of you at the edge of the table with the ends to the left.

These are the basics to know. Then it will be enough to behave well and not to make the clown with its chopsticks. Here is another article on the habits and customs at table in Japan.

Here are a few simple steps to help you get the right technique.

There is no secret, you just have to practice! Here is a video that explains very well how to use chopsticks:

The Hashi oki to place your Japanese chopsticks

The hashi oki is a small utensil that allows you to rest your Japanese chopsticks so that they do not roll on the table during your breaks when you eat. This chopstick rest also prevents your chopsticks from touching the table and is more hygienic. They come in different shapes and are made from clay, wood, plastic, metal, glass, porcelain or precious stones such as jade.