Matsuri, national holidays or traditional festivals, are numerous in Japan throughout the year, especially in spring and summer. These holidays are often linked to a Shinto religious celebration.

Japanese people like to go there with their families, couples or friends and some of them like to come dressed in traditional clothes like yukata, a light kimono. You will find many food stalls called yatai. Here is a non-exhaustive list of sweet and savory dishes that can be found during these festivals. 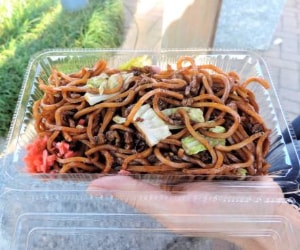 These arenoodles stir-fried on a hot plate, typical yatai dish, these noodles are delicious thanks to its Japanese otafuku sauce and beni shoga. 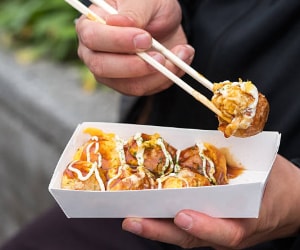 The takoyaki are small balls stuffed with octopus. You will find some with shrimp, these will then be called ebiyaki. It is a very common street dish in Osaka in particular. It is sold on the go, to be eaten hot with Otafuku sauce, Kewpie mayonnaise, Katsuobushi flakes and aonori seaweed! Find our takoyaki recipe to make at home! You don’t have a takoyaki mold? Then try our recipe for kakutako, a lesser known version of takoyaki to be made in a pan but just as tasty! 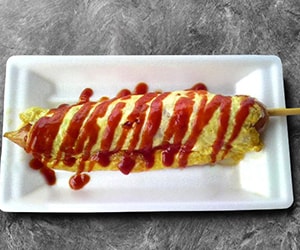 A Frankfurter skewer, is a sausage wrapped in a thin omelette on which ketchup and mayonnaise are added. 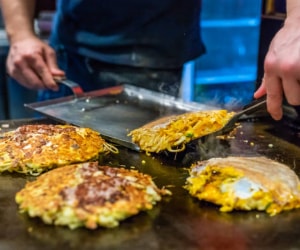 L’okonomiyaki is the big sister of takoyaki. Indeed, even if we can find it widely in the whole country, it is also very common in Osaka. It is a kind of thick pancake made of ingredients of your choice and topped with otafuku sauce, Kewpie mayonnaise, aonori and bonito flakes… A delight! It is to be noted that several versions exist and that according to the regions, the proposed ingredients are quite different! You will see that even these forms can evolve as with theHashimaki which we speak about below for example! You want to make this dish at home? Don’t hesitate to try our home-made okonomiyaki recipe! 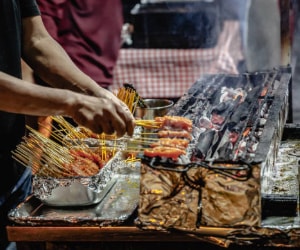 . Already well known in France, the yakitori are very popular in matsuri, they are grilled in front of you with charcoal. Even if the word yakitori means indeed grilled chicken, you will find in these stalls skewers of fish, vegetables, seafood… 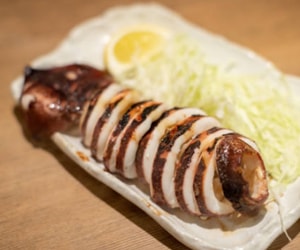 Ikayaki are cuttlefish grilled on a griddle and cut to be easily eaten on a skewer. 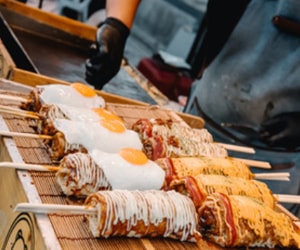 We have seen okonimiyaki above. Well here is the skewer version. Depending on the recipe and locality, we will find a horse egg on top and some negi chives… 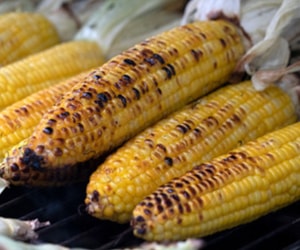 Very popular in Japan, corn will find its place during these events. The corn cobs will be grilled and most often seasoned with soy sauce and sometimes with melted butter on top. Butter and soy sauce go particularly well together… 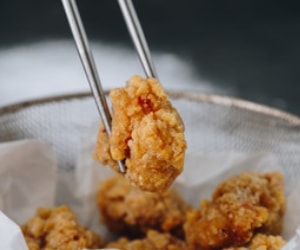 The karaage are small fried fritters made with meat, the most common and popular version is made with chicken. These fritters are very light and crispy at the same time. You’ve seen them all on sale in combinis. 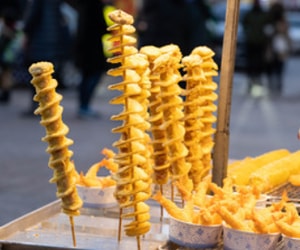 It is a potato skewer, cut in a very original way and fried like tempura. A classic that children love! 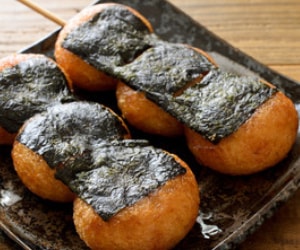 Agemochi are mochi (ball of sticky rice) fried in oil and seasoned with soy sauce. They form like most mochi a skewer of 3 mochi. 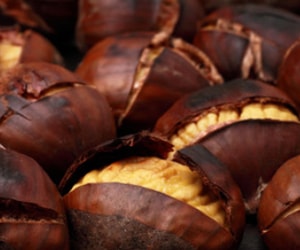 Here is a specialty that will not disorientate the French since we will find the traditional roasted chestnuts as we have them in France. 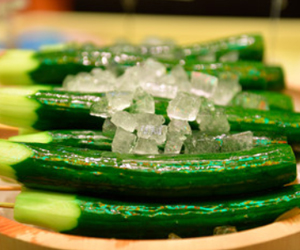 Surprising but yes you will find cucumber sticks placed on ice cubes so that they stay fresh. Finally when it is hot these cucumbers are very refreshing and healthy! These skewers are also common in Japanese markets. Generally speaking, as soon as it starts to get hot, the number of shops offering iced cucumber sticks increases. 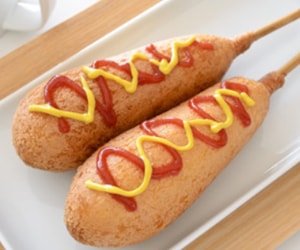 TheAmerican Dog is a sausage skewer surrounded by a thick batter fried in oil. On top is ketchup and karashi mustard in the manner of a classic hot dog. 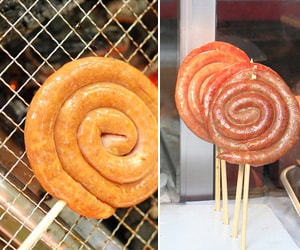 It is a grilled skewer with a sausage rolled up on it. We have never tried this version. The shape reminds us of the French charcuterie stalls… This does not invite us to taste it. 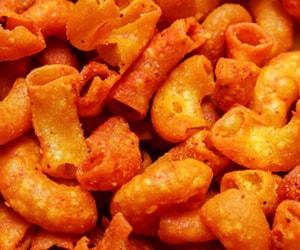 Simple and effective, it is fried pasta served with salt and pepper in a cone or in a basket. Light and crispy, it is easy to make at home! 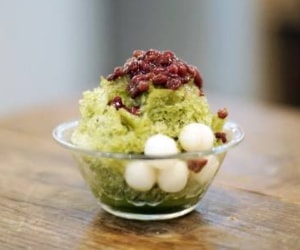 The kakigori is a very light and refreshing crushed ice cream. It is a very popular dessert in Japan and can be impressive by its size sometimes! 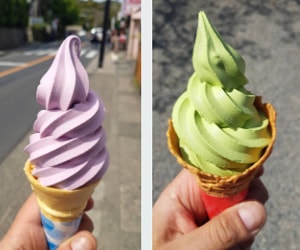 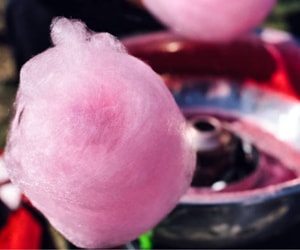 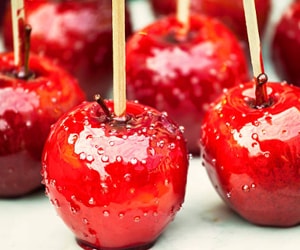 Another classic French dish, the “pomme d’amour”! Skewers of apples coated with a crunchy caramel. 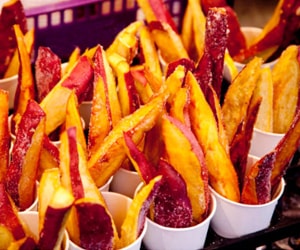 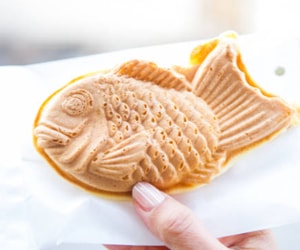 The taiyaki is a Japanese cookie in the shape of a sea bream often filled withanko, sweetened red bean paste, a very popular dessert! If you have a taiyaki mold, you can easily make it at home! Just follow our recipe for homemade anko! 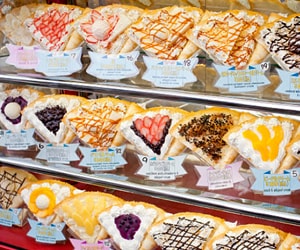 Very tasty pancakes with lots of fruits, creams, sauces, ice creams… The Japanese offer a huge choice of possibilities! And all the ones we tasted were delicious! 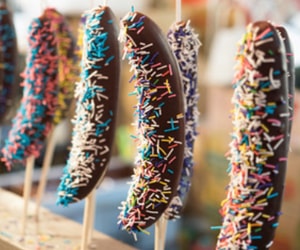 Skewers of bananas colored and coated with chocolates. This is the Japanese version of the banana split! 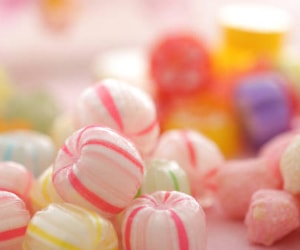 Very big hard candies, typical of festivals in Japan. There are different flavors. We could compare them to our fruit berlingots! 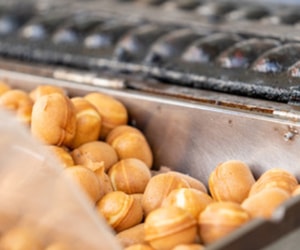 You know the castella ? A typical Japanese sponge cake, well here is the “baby” version. Unlike the castella which is really light and fluffy, the baby is crispy on the outside. 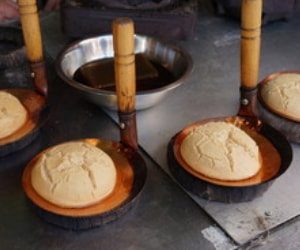 Karumeyaki is a traditional Japanese cake. It is baked in a small pan with corn syrup, sugar and baking soda until it is crispy. It has a texture similar to meringue. 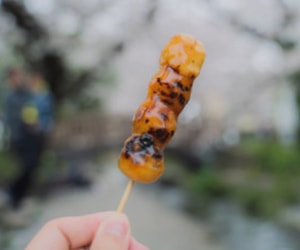 Mitarashi dango are skewers of grilled mochi balls seasoned with soy sauce for example. They are found everywhere and remain very popular in Japan.

During these festivals Japanese people often accompany these dishes with Japanese beer! The atmosphere is very friendly, traditional thanks to the music and kimonos and magical with the fireworks! So if you plan a trip to Japan, don’t hesitate to go to a matsuri!

The dates of the main matsuri in Japan