Mochi is a typical Japanese food, discover all its uses in Japanese cuisine. Presentation: 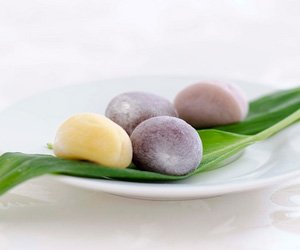 Mochi 餅 is a family of sticky rice cake (sticky rice is also called mochi 糯 but the kanji is different which can be confusing) that accompanies many Japanese desserts and some savory dishes. Mochi has a very gooey and slimy texture that may surprise at first. It can be steamed or baked, boiled, grilled, stir-fried or fried. It is a very popular New Year’s dessert in Japan. In France, when we think of mochi, we think wrongly of these famous pink, green or white balls which are in fact daifuku. The mochi is actually a family of desserts, a set which includes for example daifuku (these famous balls), the dango (sticky rice skewers), the sakura mochi etc… We will see below the differences.

The different types of mochi

A sweet rice pastry with a lightly salted cherry leaf on top. The leaf is eaten.

Ohagi is a seasonal mochi. It is eaten during the spring or autumn festival.

This mochi is traditionally eaten on May 5 for the boys’ festival called Tango no Sekku. The leaf is not eaten.

A summer dessert made with the powder of kuzu

There are many mochi, we will not list them all. But we can see that this glutinous rice dough is omnipresent in Japanese pastry and is often eaten during the holidays. The busy districts offer it all year round in stalls. These stalls are very popular with Japanese people who rush to get their colored skewers.

It is a salty soup with mochi in it that is only eaten on New Year’s Eve.

Covered with sauce, previously grilled. This version is one of the most common in Japan

Cut into squares and then grilled.

Fried, to be enjoyed as an appetizer. You can find them in some izakaya.

1 – Soak rice in water and steam glutinous rice. 2 – Crush the rice in a mortar or beat with an electric machine. 3 – Shape the dough by hand into a round shape and roll it out to cut it into pavé. The dough will keep for a long time at room temperature. It is a base that has no real taste and is suitable for both sweet and savory preparations. This manufacturing process is very long and requires a lot of work. However, you can find ready-made pasta. Some add water and cornstarch to the recipe.

Personally I tasted some mochi in supermarket and others made by hand, and as often the difference is clear, the “home made” is much better. If you feel like it, I advise you to prepare them yourself!

New Year’s Eve in Japan, the occasion to prepare the mochi tsuki 餅つき

Mochi-tsuki 餅つき is an important event in the traditional preparation of New Year in Japan. It is usually done at the end of the year, around December 25 to 28. The rice once steamed is placed in a large stone or wooden mortar called usu. Then it is hammered with a large wooden hammer. This process is usually done in family.

Some are set aside as divine offerings. The Kagami-mochi 鏡餅, is a beautiful example. It is two round mochi placed one above the other. The lower part being slightly wider to represent the seat of the New Year deities.

Modernization has seriously weakened the mochi-tsuki tradition. Although some farm households still pound their own mochi, most urban residents usually order them from specialized stores or make them at home with an electric machine.

Haagen Dazs brand released mochi ice cream in Japan, and it was an immediate success so much so that the manufacturers had to stop the sales temporarily due to lack of products.

They created 2 flavors: “kinako kuromitsu”, composed of roasted soy flour and sugar, and “matarashi kurumi”, composed of a soy and walnut glaze. The texture is very gooey, if you are curious about the texture here is a video: