A refreshing and original drink, the Salt & Fruit drink. Presentation: 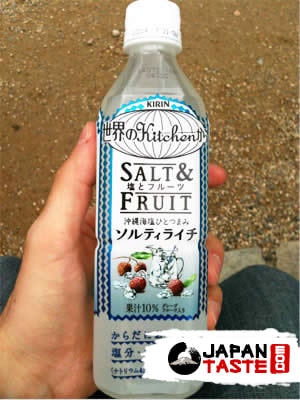 Salt & Fruit Kitchen World drink is a non-alcoholic drink very popular in Japan that you can easily find everywhere and especially in the numerous drinks distributors or in the Japanese konbini (small supermarket).
As its name suggests, this fruit juice based drink is slightly salty! Yes, salt in a sweet drink!? Surprising no? It is however very refreshing and delicious, moreover there are several kinds so for all the tastes, no wonder that they meet a great success in Japan.

Its composition is quite simple, indeed we note less than 10% of fruit juice, which is relatively weak to qualify it as “fruit juice”, salt from Okinawa (small island known in the south of Japan), sugar and water in majority. Some flavors also include a cloud of milk.

Personally we had a big crush on these drinks, they are tasty and really pleasant! If you want a thirst-quenching and surprising break, don’t hesitate!

The drinks of the Kirin brand (famous Japanese brand known for its beers in France) are inspired by desserts of the world (Thailand, France, Switzerland, Vietnam, Italy…).
On the bottle is a quote that says ” fruit is more delicious with salt “, this is indeed the basis of their concept which has been declined in drinks by the Kirin brand. They have opened a range of ” Salt & Fruit ” ” world kitchen “, literally, salt and fruit and world kitchen.

It is interesting to know that in Asia, many people eat fruits seasoned with salt. This enhances the taste and is quite interesting in the mouth. But be careful not to put too much! It works quite well with pineapples for example.

The Kirin brand decided to produce drinks inspired by authentic recipes from different countries of the world. For example the lychee and salt drink was inspired by the Thai cuisine of Chiang Mai. Their advertising is quite telling:

I invite you to go and see by curiosity on the Kirin website (in Japanese), you can see their inspirations and reports.

Despite the fact that it contains less than 10% of fruits, you can really feel the taste of the fruit with a touch of salt. This drink is delicious when it is very fresh. Its taste is rare and unique, so we advise you to taste it if you have the opportunity to go to Japan.

There are of course other flavors that you can see on the website of the brand (in Japanese), but also other products! Indeed, these juices have been declined as often in Japan in ice creams, candies etc. Personally, we loved these drinks. In Japan, there are drink dispensers absolutely everywhere. Even in unlikely places, so don’t worry you will find them!