Soy sauce is a condiment that accompanies and is used in many Japanese dishes.

Soy sauce or shoyu: a basic ingredient in many Japanese dishes. 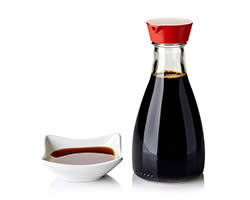 The shoyu “しょゆ” or Japanese soy sauce is a black (more or less dark) liquid condiment obtained from the fermentation of soy, wheat and salt.

Its basic ingredients and manufacturing are similar to those of miso.

The Kikkoman brand is the best known and most natural, while other brands are chemically manufactured and contain many additives.

Originally from China, refined in Japan

Soy sauce was born in China, it was invented by Buddhist monks and was made of soybeans, water and salt. This Chinese soy sauce was imported to Japan by a monk and was soon appreciated by the Japanese who perfected it by adding wheat in equal quantities with the soybeans. This is how Japanese soy sauce called shoyu was born.

The benefits of Japanese soy sauce

The addition of wheat in this Japanese sauce adds flavor and extends the shelf life of Japanese rice dishes and especially adds flavor. In addition, soy sauce has a salty taste without overpowering the flavors of the food. Excess salt is not good for your health, so you can replace it with a little soy sauce. Soy sauce also aids digestion, which is appreciated after a good meal.

Kikkoman sauce is now available with 43% less salt. We use it in our dishes and the taste is no different from that of non-lighter sauces.

In France, each region has its own cheese specialty, in Japan it’s the same but with soy sauce. What differs are the ingredients used and the method of preparation:

1 The best known, most used and most widespread: Koikuchi shoyu. It is considered as the typical sauce of Japan. It is based on soybeans (50%), wheat (50%) and salt. It is made in Kanto but spread all over the country.
Its use: Very versatile, it is used in all Japanese dishes and seasonings.

2 Usukuchi shoyu: This sauce is slightly saltier than Koikuchi shoyu and slightly colored. It is used in dishes where the natural color of the food must be preserved. Its ingredients are the same as Koikuchi shoyu but with much more salt. It is very popular in the Kansai region.
Its use: To be eaten with meat, white fish and vegetable dishes.

3 Tamari shoyu: Of intense color, the tamari has a very particular flavor. This sauce contains very little or no wheat in its composition and is intended for a public allergic to gluten. Tamari is considered the original soy sauce when it was introduced to Japan from China. Its taste and texture is thicker and more viscous than that of Koikuchi shoyu soy sauce. Note that it takes on a nice reddish color when heated.
Its use: tsukudani (a small fish or shellfish cooked in soy sauce), sembei, teriyaki. For purists, it is the sauce that accompanies sashimi. That is why this sauce is also called Sashimi Tamari.

4 Shiro shoyu also called white soy sauce: This sauce contains a lot of wheat and few soybeans unlike tamari. As a result, its color is much lighter and its taste is sweeter. During cooking, this sauce changes color and also after opening, but this does not alter its flavors.
Its use: broth for noodles, soups and dishes. It is also used in dishes whose colors and aromas you wish to emphasize.

5 Saishikomi shoyu: Stronger in taste and darker than Koikuchi shoyu, the only difference is that it has no salt in its composition.
Use: Saishikomi-shoyu is also called Kanro-shoyu which means “sweet shoyu“. It is eaten with sushi and sashimi but also with tofu.

These are the 5 main Japanese soy sauces but there are also others such as Yuzu shoyu: A mixture of soy sauce and yuzu juice (a Japanese lemon) sometimes with added sake and mirin or kikkoman reduced in salt, or organic soy sauces.

If you are lost in all these sauces, the one you should buy is Koikuchi shoyu because it is very versatile.

The difference between Chinese and Japanese soy sauce

Use Japanese shoyu soy sauce for Japanese cooking and not Chinese because it is much stronger in taste and saltier. An extra spoonful of Chinese soy sauce will quickly add salt to your dish while Japanese is lighter and less dense.

The shoyu, an accompaniment and flavour enhancer

Just like dashi, shoyu is part of the so-called “umami” elements that give the dish a tasty taste that is why shoyu is used in many dishes:

You will have understood it, it will always be necessary to have in your cupboards a bottle of shoyu! It will not take the dust, trust us! Once your bottle is opened, the soy sauce can be kept in your refrigerator.