Ramen is a very popular dish in Japan that is eaten much more than sushi ! Presentation: 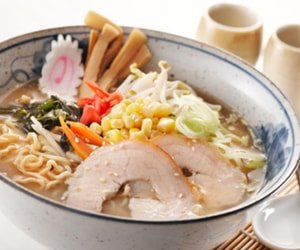 Ramen ラーメン are Japanese dishes consisting of Chinese noodles in a very hot fish or meat broth served in a large bowl. The soup is seasoned with shoyu soy sauce, miso fermented paste, or shio salt depending on the recipe.

There is a wide variety of ingredients on top depending on the recipe but most of them are chashu (grilled pork), menma (bamboo), narutomaki (a kamaboko a surimi-like fish), corn, a soft-boiled egg negi (onion) or nori (seaweed).

Originally from China, ramen was imported after World War II via street stands. Economical, nutritious and hot, its success was immediate. And since then, each region has its own recipe, other foods are added or changed. One more reason to travel outside Tokyo and Kyoto.

Nowadays, count 600 to 900 yen (or less) for a dish of ramen in Japan, which is about 5€ depending on the yen rate. Today, ramen is considered a dish in its own right. There are 35,330 ramen restaurants in Japan!

The noodles are usually yellow because they are made of flour, egg (depending on the recipe), salt, water and kansui (a type of alkaline mineral water containing sodium carbonate) that is why these noodles are wavy and yellowish. They are firm, thin, soft and gooey in the mouth. They go very well with the broth in the mouth. There are now hundreds of recipes for noodles, angular, round, thin or thick, wavy or flat… Everything depends on the region.

In Japan, it is customary to suck up the noodles while making noise because it cools the noodles and reinforces the flavors in the mouth.

The ramen is served very very hot! So be careful! Moreover, sucking while making noise is a sign of politeness in Japan showing that you appreciate the dish. Noodles are eaten with Japanese chopsticks and not with a spoon. 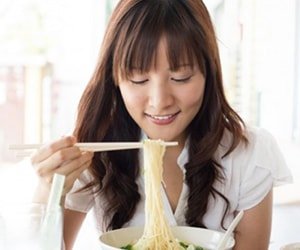 Japanese people do not hesitate to eat them at any time, salarymen, students, old people, poor people, rich people… Everyone has adopted them. The ramen is considered as a fast food which is usually eaten very quickly and alone… Japanese people usually don’t take the time to eat it and chat. You can even land in a ramen-ya ( ramen restaurant), eat standing, on a counter of 7 people, outside, at 2am-3am, and gobble it up in 5 min, you won’t be frowned upon. At all!

Japanese people have the principle to eat quickly because as there are not many places, they think about the next people waiting for their turn.

It could be considered as an on-the-go, warming, cheap, and good food! The yatai (Japanese stand) sell it regularly. Look behind their noren curtains, you will be served in only 5 minutes and often accompanied by a grandpa or a granny from the corner. Its great success is the fact that it adapts well to the life of the Japanese, the salaryman, after their “meeting to drink” always finish with a bowl of ramen. Hearty, comforting, varied and good, it is a dish that also allows to sober up.

The ramen in Japan 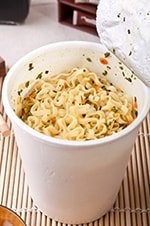 Instant noodles or cup noodles are very common in Japan. The brand Nissin Foods is one of the pioneers to be established as instant noodles since 1958 and competes very well with American fast food like Macdonald’s. Nowadays, ramen restaurants offer to sit and eat face to face in a more cozy atmosphere. Originally, ramen was meant to be eaten on the go, standing at a counter or outside. But today there are also more traditional restaurants with waiters to take your order and where you can take your time and enjoy your dish. Ramen is very popular, there is even a museum (yes yes!, very amazing) Shin Yokohama Rāmen Museum which opened in 2006. A museum where there are many restaurants offering old or modern ramen, stores, games…

As you have seen, ramen is very present in the daily life of Japanese people. Simple and delicious, they are a staple of Japanese cuisine.