Gyoza are fried cabbage and pork ravioli revisited by the Japanese, a delight. You will find gyoza in Izakaya and Japanese restaurants. 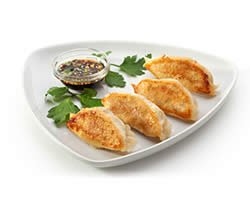 Of Chinese origin, the gyoza “ギョーザ” are fried cabbage and pork ravioli revisited by the Japanese. Its shape is made with soft wheat flour and inside is a stuffing that can be composed of many different foods. Very popular in Japan, you will find gyoza in ramen restaurants and Izakaya (Japanese bars).

It is a dish that is often served with ramen or as an aperitif snack with edamame.

These Japanese ravioli are eaten one bite with Japanese chopsticks but before they are eaten they should be dipped in soy sauce with chilli oil and rice vinegar or ready-made sauces also exist.

The difference between Chinese and Japanese ravioli

So what are the differences with Chinese ravioli?
– First of all the taste! In the stuffing you will find sake or other Japanese products that you won’t find in Chinese ravioli.

– Then the cooking! Indeed, Chinese ravioli or “dim sum” are generally steamed. Japanese ravioli are cooked in 2 times: in a little water and then grilled on one side which makes them both soft and crispy. The texture is therefore different.

– And finally the dough! Indeed, Japanese ravioli have a much thinner dough than Chinese ravioli. At the time, when gyoza was imported to Japan from China, flour was a luxury product, so the Japanese made a thinner dough.

Today gyoza has been declined in Japan, there are 3 varieties:

1 Yaki Gyoza “焼き餃子”: These are the ones mentioned above, so they are toasted on one side. They are the most widespread gyoza in Japan.

2 Sui Gyoza “水餃子”: These are boiled and served in a very light broth. They are rarer but can be found in Japan in Chinese restaurants and gyoza restaurants.

3 Age Gyoza “揚げ餃子” : These totally fried are also less common but are easily eaten in Chinese or specialized restaurants.

Gyoza are really popular in Japan and very well known in the cities of Utsunomiya and Hamamatsu. These two cities have a large number of restaurants specializing in gyoza. 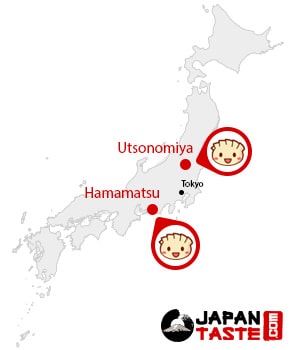 Many of them offer gyoza with less conventional fillings such as shrimp, mushrooms, cheese or shiso leaf. In addition, every year a Gyoza festival is organized to find out which restaurants offer the best!

Gyoza out of Japan

These Japanese ravioli are beginning to become popular out of Japan, so much so that gyoza bars are springing up in many countries and cities. You can also find them in Japanese ramen restaurants or simply frozen in Asian grocery stores.

The best is still to taste them in Japan or to make them yourself because you will be able to personalize the stuffing. Gyoza can be frozen easily, which makes it a tasty aperitif and quick to reheat.