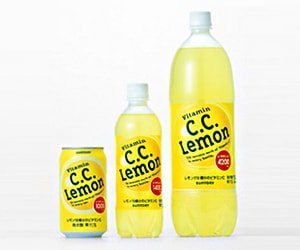 C.C Lemon(C.C レモン) is a yellow colored Japanese lemon soda. It is a very popular drink since it is just behind the American giants Pepsi and Coca Cola. This drink was created by the brand Suntory, a Japanese company that owns many famous whiskeys among others. You can easily find it in vending machines and supermarkets in Japan in different forms such as cans, large and small bottles. C.C Lemon claims to contain as much vitamin C as 50 lemons more or less depending on the size of the bottle! It is a refreshing drink especially in summer in Japan and gives you a little boost in the day.

And the taste? We appreciated much more this drink than the Calpis for example. It is a carbonated drink with a simple lemon taste.

Its success, the mascots

As you can see, its taste is not very original since we know other lemon-flavored soft drinks like 7up, Fanta, Schweppes… Its success comes mainly from its marketing side and perhaps also because the Japanese love the yuzu a citrus fruit close to the lemon.

To promote this yellow drink in the 1990s, Suntory signed an agreement with the characters of the Simpsons, which were very popular at that time. C.C Lemon became THE Simpsons drink, a cool and family drink. Yellow like the Simpsons.

There is also another mascot, Mr C.C Lemon. A kind of gaijin (foreigner) superhero dressed in yellow who helps Japanese people in their daily life.

The C.C. Lemon logo was on the Shibuya Public Hall, an entertainment venue located in Tokyo’ s Shibuya district from 2006 to 2011. Suntory paid nearly 80,000,000 yen to have its name associated with the building with its logo in huge! Indeed, its other name is C.C Lemon hall.

This version is recommended for sports activities, it has the same properties as the Pocari Sweat.

An adult version, it tastes closer to beer and is more bitter.

A honey and ginger flavored drink

It is a drink sold in Japan and Asia, unfortunately in France there are very few. You can find it in some Japanese grocery stores for the lucky ones and if not you can always buy it on the internet.